The Leadership Collective this year brought the cohort of students to Ladakh, a desolate upper desert , which is one of the frontiers of the Climate Change debate . Decreasing snowfall, melting glaciers, prolonged summers etc have profoundly affected the region .

Following arrival in Leh ( 11500 feet) the group split into two groups and spent the next two days acclimatising to the altitude. The thin air and other factors did take a toll on some students but plenty of water, oxygen and  rest at the local hospital saw them through to at least partial recovery . Day 1 was rest day with no activity . On Day 2 after a  morning visiting Leh Market the group did a joint visit to the magnificent Thiksey Monastery with its multiple levels of public and private spaces .

After that the two groups  of the Leadership Collective students spent the rest of their Ladakh stay  alternating between the eco-friendly campus at SECMOL and the Nubra Valley .

At the SECMOL campus the students became part of the regular campus life with the Secmol students . Doing chores” responsibility time”  with the Secmol students, participating in twice daily conversation classes to improve English proficiency of the Secmol students ,  giving evening talks and presentations,participating in talent shows etc gave the Leadership Collective students the opportunity to both share their past experiences  and obtain new ones . The setting of the Secmol Campus on the banks of the Indus with its shaded grove and the mountainous  Hemis national park clearly visible added to the sense of living in the midst of nature . Clear skies at night without any ambient urban lights allowed the students to have a special view of the night sky with the Milky Way clearly visible one evening . Some students even thought they saw a shooting star . The interactions with the Secmol Students beyond the conversation classes included a presentation by one group of their own home locations . Group’s of Secmol students wandered through installations prepared by the Leadership Collective students learning about places like Philadelphia, Chicago, Washington DC, Anantpur , Bangladesh, Haiti, El Salvador etc bearing witness to the diversity of originins of the Leadership Collective group .

For both groups the shift from Leh/Secmol to Nubra took them over some of the highest terrain in the world . After descending the world’s highest motorable road at Kardung -La pass, the 360+ leadership Collective welcomed a breath of fresh air at the lush Kesar Farmstay in the Nubra Valley. This marked the beginning of a segment of the trip focused on understanding the Ladakhi family structure, their relationship to their resources, and how those resources are effected by climate change.

Students spent their first morning working on the Kesar farm, tilling soil, transplanting vegetables from the nursery, and harvesting vegetables for momos. They also had a Ladakhi language class led by our local guide, Rigzin Chosdon, and prepared for the cultural tasks of adapting to their upcoming homestays.

At the homestays, students experienced a taste of authentic Ladakhi life, working on the farm, preparing traditional dishes like skiu and yak butter tea, and sleeping on Ladakhi rugs. The students immersed in the local culture all the while viewing the experience through the lens of climate change. As Bergslyne Thomas noted, “The people here are so resourceful that they even use their own waste to make compost. It’s really the circle of life.” When the students returned to discuss their experience, many seemed inspired by the Ladakhi ability to cherish resources and practice moderation in what they own and consume.

While in Nubra, one group of  the 360+ Leadership Collective linked up with volunteers from the World Teach program. Volunteer teaches from Harvard and Tulane facilitated an evening of interaction between the Leadership Collective students and local students at Lamden Hostel. Students split into groups and created shadow puppet shows and played sports with hostel students. Nazia Tabassum learned a Ladakhi dance and taught the Ladakhi students a new Bollywood number.

The Nubra finale was an action packed day with rides on double humped camels and a whitewater rafting trip on the shayok river. With the river swollen by seasonal snowmelt, we expected the chocolate color of the river to be an indication of pollution. However, when the students tested a water sample from the river, it was negative for nitrites, nitrates, and had healthy levels of iron and hardness. It was refreshing to see that, while access to water is rapidly changing in Ladakh, at least this river remained relatively pristine.

Both groups also undertook an overnight trek in Hemis National Park , the home of the fabled snow leopard . At the time of writing one group had completed thus trek including homestays with host families . No snow leopard sightings but other indigenous species like Blue Sheep were spotted.

From changing spring sources in rural california, seminars about green economics in San Francisco, the drying of agressan ki baoli, the staining of the Taj Mahal, a burgeoning organic movement in india, and a rural and sustainable lifestyle, the 360+ Leadership collective students are starting to see the connections. The home stretch will see this understanding turn to expression 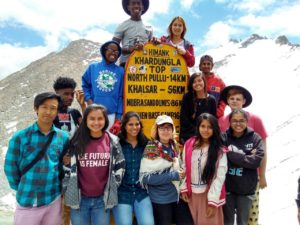 Passing over the Pass was breathtaking- literally I couldn’t breathe at all. The view was so majestic: so serene yet so chaotic. There were so many instances that could have been our last . We were so close to the edge all the time and the bumpy rocks we passed over made the experience that much more gut wrenching. The view was absolutely unbelievable.Passing over the highest road in the world is one of my highest achievements. While many kids at home were getting high on weed this July I would have the highest without taking in a puff , without even breathing. In Nubra Valley now that I had conquered the highest pass my reward is the captivating mountains all around me . I feel like I am walking inside a computer wallpaper all the time . 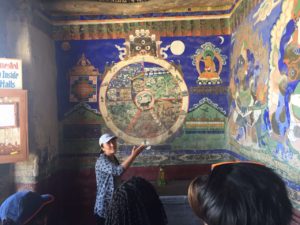 Hello, I am Mr. Himalaya.

That is what people called me. I am posted in the northern part of a very huge nation. I possess a very unique potentiality that no one has had. People are usually not very interested in me because I don’t supply them with enough oxygen. The reason I don’t give enough oxygen indeed has a reason behind it. I am scared that they would destroy my cool world, so I catch those by taking away their breath.  I don’t mean to take away their precious life. Just to scare them that they may not pursue farther.

While you have more perseverance than I though, you are a little creature who is much different than I thought. I would like to extend out my heartiest welcome to all of you.

No, that’s all.  I do have one condition and that’s that you will never disparage me with your inhuman behavior. Because you are an expert in climate change.

When I first met my host family my expression was ‘woah’ and it was because they were very nice people. Also, because they have a huge house. Before I met my family, I was really scared and happy at the same time. I was scared because I did not know how they were going to be character wise and also if they were going to have tissue paper or not. But it was totally different from what I expected. They are really nice and sweet like honey. And I was really happy because they had toilet paper to use in the bathroom. The first thing we did when we arrived at our host family’s house, we walked around the house and then I went with my hostmom to her shop to help her with some customers. Then, when I got home I was helping my group with the field. Later, we helped our host mom to make the best food which was ‘skev’. This dish was the first dish I liked during my stay in Ladakh. This is an experience I won’t forget for my entire life. I don’t even have words to describe how amazing the time was that we spent with our host family. I hope one day I get to visit them again.