I have just had one of the most amazing experiences of my life. For the last three weeks I, together with four other adults, have been in the company of 10 high school students from the US and traveling with them on a Study-Serve-Share tour of India. Alternating between cycles of excitement, exasperation and exhaustion it has reinforced my belief that as Forrest Gump said, “Life is like a box of chocolates.” But for some that box does not have the choices which some of us take for granted and wrongly assume is available to all. Their boxes of chocolates are often limited to yesterday’s flavors which society grudgingly gives them to demonstrate the availability of choice while continuously inventing new ones for those who already have more than enough. Absent innovative programs to bridge the gap some kids are metaphorically and literally condemned to travel in the back of the bus or plane, to shop in the clearance rack at the back of the store and generally stand in line while others use their Platinum or Gold status to jump the queue.

The 360+ Leadership Collective grew out of an experience I and a few others had a few years ago. We were part of a trip to India by high schoolers mainly from the positive end of the ‘have/have not’ divide. We felt the purpose of that trip was more to make the participant’s resume look good for college admissions than to provide any real learnings from the diversity and richness of India and its often purposeful chaos, cuisine, culture, cities and citizenry. We also felt that in a world where people increasingly are talking about the benefit of being Global Citizens, the path to becoming one was limited to those who could afford to travel out of their immediate environments to literally see issues from different perspectives. We therefore decided to give the same opportunity to students from low resourced backgrounds. 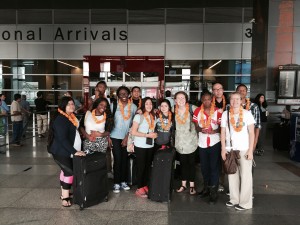 So on July 31st, 10 high school students (some had not even flown before the start of the trip, none had for this distance and length and most had only just got their first passport) from the U.S. boarded an Air India flight from New York to Delhi for a three week trip of discovery of India and more importantly, themselves. As I write this narrative, this group of 5 African Americans, 3 Latinos, 1 Native American and 1 Caucasian are somewhere over The Atlantic on their way home, possibly catching up on much needed rest, watching movies, listening to music and/or re-living part of their experiences of the past three weeks.

After a day of Orientation and getting to know each other better through games, they started their tour geared to use places they visited to elicit reflection, comment and discussion around major themes relevant to India and the U.S. To frame a reflection on 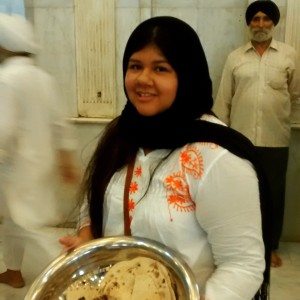 religion they visited Akshardham with its ‘over the top’ theme park quality, helped cook
and serve for Langar (public free kitchen) at Bangla Sahib Gurdwara, rode cycle rickshaws through old Delhi to Jama Masjid, walked through the jostling narrow streets to Nizamuddin Darga and listened to khawali music. To understand governance and U.S./India relations they visited with the American Ambassador who told them that India would profoundly impact their lives in the future and then sat in the VIP gallery at the non-functioning upper chamber- Rajya Sabha- of India’s Parliament and learned about India’s governing model. To understand Indian cuisine they 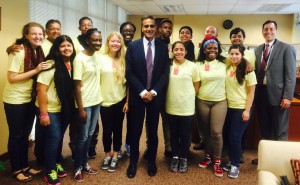 started their India journey adventurously in Delhi on August 1 with dinner the very first night at Khan Chacha (Khan Uncle) a Delhi icon for kebabs and followed it up with a vegetarian Rajasthani Thali (plate), a brought in Indian Chinese dinner at the Youth Hostel which was our base, a brief familiarity with Dominos in Connaught Place, kebabs again at Karims in Nizamuddin and then a special treat elegant dinner at Olive, one of Delhi’s best known restaurants. In between they bargained for curios and stuff at Delhi Haat (market) and went on a day long visit by train and cars to the Taj Mahal (a collective WOW) and Fatehpur Sikri where all of them tied “wish” strings at the shrine of Salim Chisti and bantered/bargained with a teenage pen seller who spoke English fluently as well as to converse in Spanish and Italian. Each evening they participated in a Peace Circle to share their views on religion, poverty, Government, Independence and the sights, sounds, smells and tastes of India. This practice of holding evening reflections of the day continued through most of the trip. 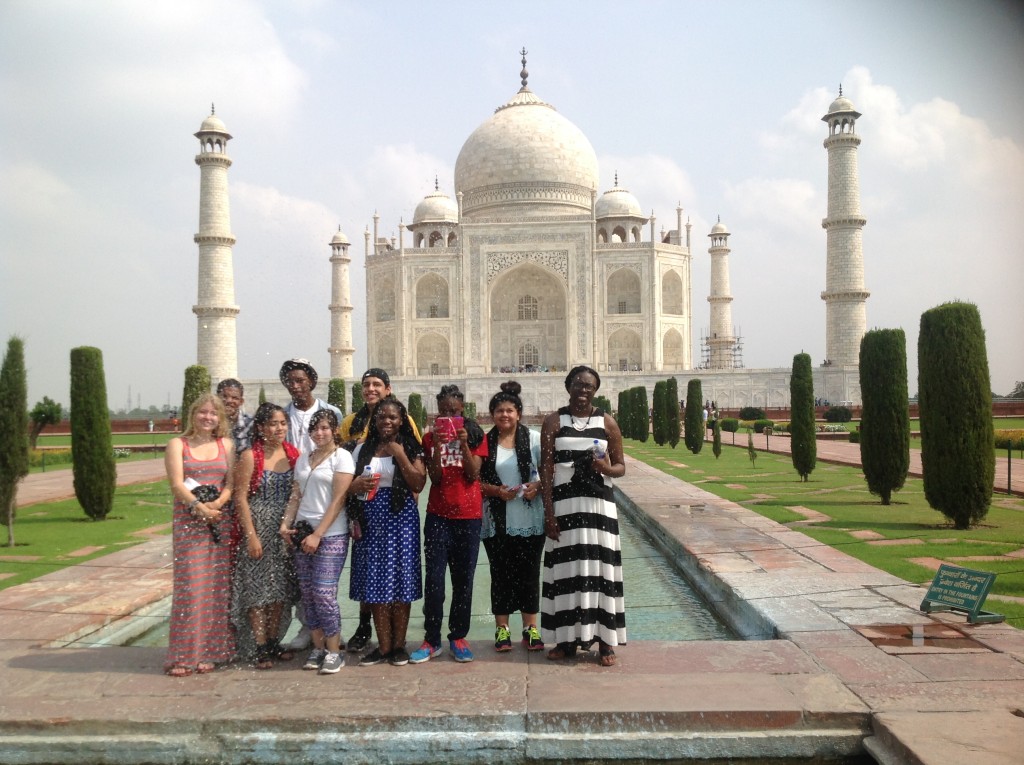 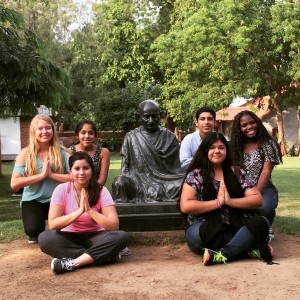 Then off to Ahmedabad on Vistara (who generously gave us discounted airfares) to stay at slightly more comfortable surroundings at the Sports Club. A visit to Mahatma Gandhi’s Ashram, sitting in his room and feeling his presence, trying out the Charkha which became his symbol for non-violent confrontation, reflecting on and honouring the simplicity and purity of his message gave the students an opportunity to consider their views of America’s own independence movement (a topic for a forthcoming presentation at Rishi Valley) as well as Gandhi’s influence on Reverend Martin Luther King and the civil rights movement. The students then visited Sherisa a village outside Ahmedabad to get a feel for rural life, starting with the Jain Temple, then Q&A with the Village Pramuk (head of the governing council) to understand how the village was organised, then on to the village dairy which is a source of livelihood, the local school which resulted in an impromptu gathering with the girls and boys from the village, a camel cart 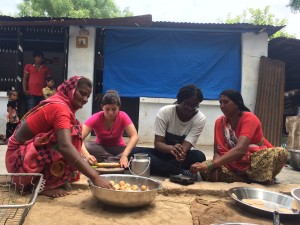 ride to a farm and then finishing with home cooked lunch by a local family. Some students tried their hand at making Puri (fried flat bread). We had Rajendra Joshi – Rajubhai – an advisor to the 360+ network accompany us on the village visit and help with translation and later share his thoughts on rural development.

This was followed by three days of interaction with students from the Mahatma Gandhi International School with its innovative model of project based learning. The two groups of students interacted through attending classes, making presentations on and to each other, games of soccer and Khokho, block printing, learning Gujarati and spinning tops, dressing up, Mehndi, Bollywood dance, blind tasting of Indian spices, a cook-off between Mac & Cheese vs Biryani & Raita and a final inspirational presentation from the school Founder/Principal who invited us to consider more such visits . The whole interaction was captured in local print and television media. A half day of shopping and final night Karaoke and dancing to celebrate my birthday ended this part of our journey. On to Rishi Valley and Andhra Pradesh. 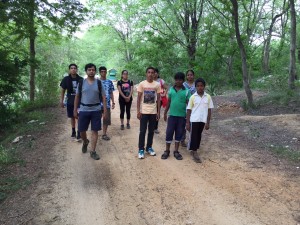 We flew from Ahmedabad to Bangalore on Indigo who too gave us free tickets and meals on board. Then the three plus hour drive to Rishi Valley with a stop for lunch in Madanapalle saw us land up at Rishi Valley in the late afternoon. We were staying at the Rishi Valley rural school campus but our meals were all at the main school dining room. So after a game of cricket that first day with the village kids we made our way to the main school. Long walks, one to the village of Thettu where we visited the templewas not a staple for many of our students. It was going to be a challenge but after some murmurings we fell into a rhythm of talking to stop thinking of the distance. 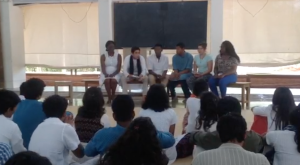 Rishi Valley, both the main school and the rural (RIVER) school, offered our students different perspectives on the education system in India. The main school is a boarding school ranked among India’s finest educational institution. Attending school assembly at the main school on two days, visiting with students in the Girls and Boys dorms, participating in a discussion on gay rights with the 10th/11th graders who had prepared a detailed presentation on the issue, sharing the different paths to independence in the US 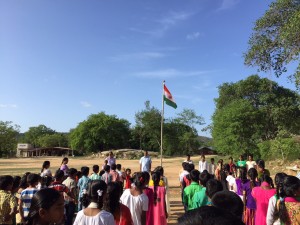 and India on August 15th- India’s Independence Day – where our students took a counterintuitive view of questioning whether Independence had indeed reached all the people, attending a sociology class and various individual student to student interactions during breakfast, lunch and dinner showed our students the richness of the education system enjoyed by their counterparts at the Rishi Valley school. Watching the senior class perform an adaptation of Rhinoceros, Eugene Ionesco’s play, hopefully evoked a desire to challenge conformity for its own sake.

Their attendance and participation at the Rural School (catering to children up to 8th grade) cluster sports event including teaching the village kids “Apple Apple Open Open” a version of Patty Cake, visiting the innovative single classroom Multi Level Multi Grade system of teaching used by that school and the general interactions with the kids from that school and the absolute enthusiasm with which they were greeted at every opportunity was an experience which was special for all the students in our group. The smiles on their faces as the girls in our group individually adopted and interacted with their own young village child was something magical. 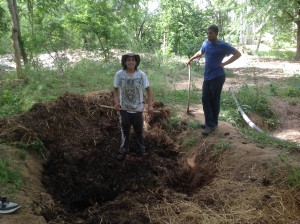 The boys in the group had an opportunity to play farmers at the Rishi Valley Estate digging up the manure pit and milking a cow.

For me however the highlight of the visit was the three way interaction of our students with the Rishi Valley and RIVER School students. While the Rishi Valley students taught the others an Israeli dance and the RIVER kids performed and taught Shadow Puppetry and showed how to make puppets, the star for all was our students teaching the others to do the “Watch Me (Whip/Nae Nae)” dance. It was electric. See video clip  below.

Sadly Rishi Valley had to come to an end. Despite a scorpion bite and a reasonable sized coconut falling on someone’s head, the students liked the collegial atmosphere of Rishi Valley. Reluctantly the group packed its bags and headed to our final destination- Bangalore. There were a few long faces which all vanished when we checked into the Lilac Service Apartments in Jayanagar generously provided to us by Shibulal, ex-CEO and one of the Founders of Infosys. After all the hard beds in all the other places the soft beds in the apartments were a clear hit with the students. 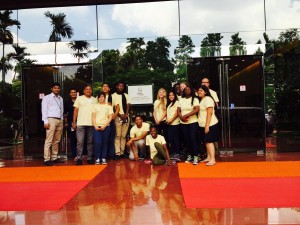 Our only official engagement in Bangalore was a visit to the Infosys Campus in Electronics City (which went off really well and was enjoyed by all) with the rest of the time earmarked for gift shopping and for the students to record their experiences of the trip for themselves and others. We will be posting their reflections on our website www.360plus.org. In the meantime here are some comments shared with me.

“This trip has helped me overcome my fear of being vulnerable. At first I was afraid of being vulnerable because where I am from, vulnerability is weakness. I was able to overcome this by growing and learning to trust my 360+ family. This experience has been a transformative process that will help me be a better and more well-rounded person.”
– Jeremiah “Andre” Garland (17)
Baltimore, Maryland


Some days you feel good about yourself. This is definitely one of those days. 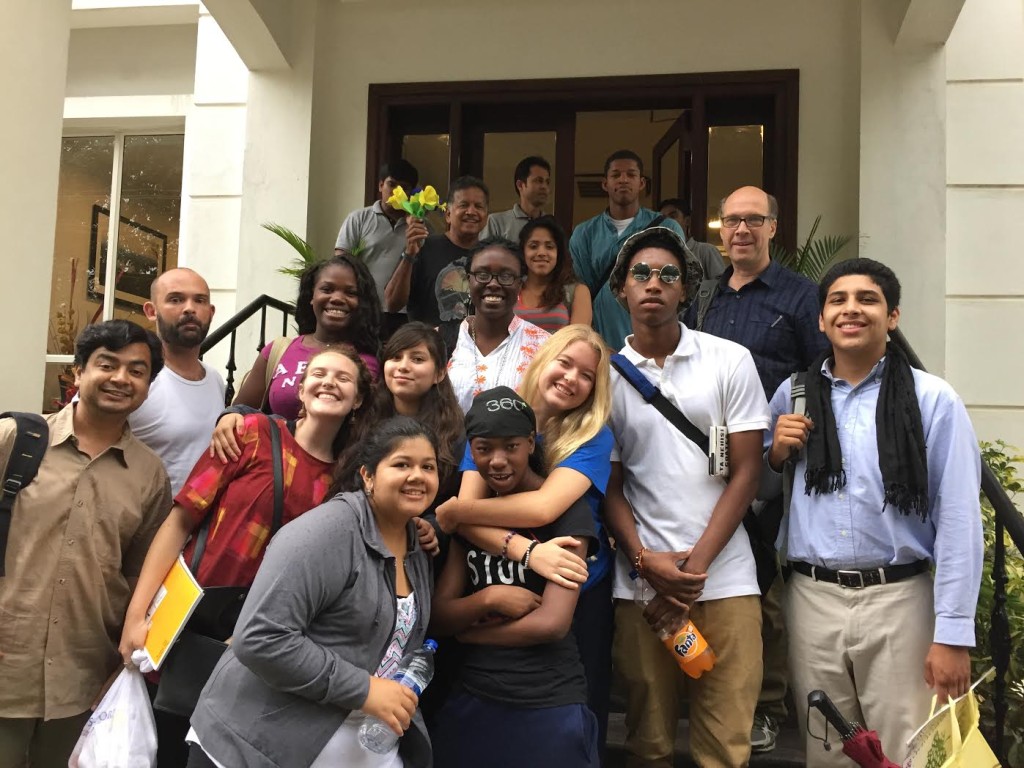