To say “360+ is great!” that would be an understatement. 360+ has given me the opportunity to be someone that I didn’t know existed. I am aware that you may be wondering, “well, who are you?” My name is Arianna Roberts, I go by Ari. I am currently 17 years of age and will be a senior in about six days. I was born in Alexandria, Louisiana. I move to Jacksonville, Florida when I was six years old. Before the trip, everyday was routine. I had a certain way of doing things and I was stuck in my comfort zone. When I applied to the 360+ leadership program I had no confidence that I would actually get accepted. I really wanted to go. The night my teacher told me about it I researched all that I could about India to make one of the my essays sound really well. I stayed up until 2:00am to finish typing the 2 essays out on my computer. My older sister Destinee helped me to edit them. I was 100% confident in my writing abilities but I constantly convinced myself that I didn’t care about the trip. It was only a defense mechanism to prevent my feelings from being hurt. 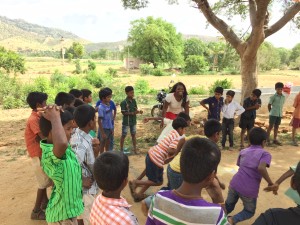 I tried my hardest to not think about it after the 2 essays were submitted. About a week later, my teacher Heather called me sounding really excited and asked if I had read my email. I said No, then she said “long story short, you are going to India!” My heart dropped! I was too busy trying to prepare myself for not being accepted that I hadn’t thought through if I actually would be. Honestly, I was hit hard by the news and didn’t really want to go anymore. As I said, stuck in my comfort zone. I expected India would be a nice colorful festive place with great vibes. Though that may be true, India has way more to offer. The crazy traffic to the absolutely delicious watermelon. India has a way of giving you a different perspective of the world. In India, my greatest experiences were cooking rotis ( indian bread) and serving food to anyone who came to eat at the gurudwara. I loved that so much for many reasons. One being that, this was my very first experience of how selfless Indians are. I quickly had an epiphany of how much they looked out for one another. The fact that they do not judge one another and you do not have to be homeless to come and eat stood out to me. They were so open to any and every one coming and eating. No one even gave us funny looks when the group sat and ate either. This was an amazing thing to experience. Not to mention how delicious the food was.

I also really loved going to MGIS ( Mahatma Gandhi International School). The students were so welcoming and friendly. They even taught us games like koko and 7 stones. They set up a scavenger hunt and welcomes u with open arms into their school. Their principle ( Anju) was really awesome and genuinely cares about her school and she accepts that people learn differently was astronomically inspiring. I became really close friends with many students at MGIS and even one friend name Sumera gave me a friendship necklace and that was an extremely generous gesture. I really enjoyed the experience here as well. I could go on forever on what I loved about this trip but one commonality about everywhere we went that I absolutely adored in many different places were the people. In villages, schools, and even this group, the people made all the hard times ok.

I can honestly say that if you love and appreciate nothing else about India, you will admire the people. These experience helped me learn that I am completely capable of way more than I led myself to believe. India taught me that I am a warrior at heart. This trip taught me that my comfort zone is merely a wall that I had been hiding behind. India taught me that facing my fears is the best thing you can do. I learned that India is crazy and so much different than you’ll expect. But you’ll love it even more because of it. Even though India has so many differences than the United States, it caries many similarities as well. Such as the value of independence. We both have an independence day but both countries are dealing with the need for more fairness amongst sexes and equality amongst social classes. I am aware that this trip allowed me to grow personally. In the beginning I relied on my friends and family to keep me grounded, because I had gotten used to depending on others. I was able to realize that I am independent to the next level. I remember thinking that I couldn’t do this alone. But now I’m thinking the next big task I can take on.

I overcame this by constantly fighting through the challenging situations and making it out alive. In the future, these experiences will motivate me to kep fighting and challenging myself because I am a warrior. And you know it’s true when you don’t need anyone’s input or validation. During this 360+ trip, I became aware of poverty even more. I was never oblivious to poverty, but I am now more alert of the impact of it. One day, we went to dominoes pizza in Delhi and we looked out te window and saw a family outside staring. There was a mother and 3 kids around the ages 3,4, and 6 maybe. We all noticed how heartbreaking this was. In response to that we spared a pizza to them and it was a highlight of my day in my eyes to see them eat. This assisted me in thinking about how I want to incorporate helping others into whatever career I pursue. I adore putting a smile on peoples face. Although we, instead put pizza sauce on their face, it was equally as rewarding. 360+ leadership collective program gave me exactly the skills I need to be more confident in who I am and what I’m capable of doing. Therefore, I repeat, “saying 360+ is great would be an understatement.”