A Perspective on Independence

The students started July 4 acknowledging that it was American Independence Day by listening to a rendition of America the Beautiful. The curriculum this day, because of its significance to one group of them, was focused on the concept of Independence and the dates and events which each student considered to be significant milestones in the journey to make the lives of people and particularly those in their community better. With 1776 as a start (but earlier dates acceptable) the students were each asked to put down at least two such events/dates which would meet the criteria of changing people’s lives for the better.

The earliest date identified was the 1665 Pueblo Revolt of the Indigenous Pueblo peoples uprising against the Spanish Colonizers. The next date – from Queensheba O’Conner – was the origin of Mardi Gras in New Orleons in 1699 as an example of community participation. Other major milestones identified were the 13th Amendment to the US Constitution abolishing slavery in 1865,  the Liberation Day in Bulgaria in 1878, Martyr’s Day in Syria and Lebanon 1916, the 19th Amendment in the US giving women the right to vote in 1920, the abolition of the Sati funeral practice in Nepal in 1920, the start of the uprising against French colonial rule in Madagascar in 1947, India’s Independence in 1947, creation of the United Nations in 1948, Civil Rights Act of 1964 in the US, Soweto upraising in 1976, Mexico hosting the FIFA World Cup in 1980, Freedom Day in April 1994 in South Africa, Obama becoming President in 2008, etc. Interesting events / dates identified included India winning the Cricket World Cup in 1983, Live Aid Benefit Concert in 1985, Roe vs Wade in 1973, legalisation of same sex marriage in the US in 2015, demonitization in India in 2016.
We intend to catalog this collaborative identification of historical events and share it widely.
The rest of the morning session was devoted to informing the students about important safety and other protocols during the trip.
In the afternoon session the group was presented with various propositions from ‘benefits of colonial rule’  to  ‘co-relation of poverty with work,’  ‘abolition of gun ownership,’  ‘need for nation states,’ and some more interesting ones. The students could Agree, Disagree, or remain Neutral but had to explain the rationale behind their choice and in that process convince others to change their own perspectives. The key lesson was to reinforce the need to understand a different point of view however disagreeable it may be.
Group Circle Reflections

The day finished with the students in three different circles reflecting on their highs and lows with regards to the matters discussed during the day .

From the reflection moment the general feeling from everyone in the group yesterday mentioned that they were happy about the presentations and activities. Others still need time for their bodies to adjust to food and their bodies still feel tired. However, everyone is excited to be here and this kind of gathering gives them the opportunity to learn from one another about different cultures as they all come from different backgrounds. Some of the things they raised I listed below:
1) Not everyone thinks the same and we should accommodate one another
2) Someone’s opinions matters and there is no right or wrong
3) Everyone here must have empathy
4) This is a good space to explore personality
5) Everyone must feel free to interact with others and get out of their comfort zone
6) This is a safe space to sharing and expressing your views
The concept of daily circles assures that students have a regular opportunity to check-in emotionally and process their experiences together. Today we broke into three smaller groups to discuss the feelings of the first two days. Everyone was in agreement; we were tired, many of us jet-lagged, and yet we all agreed that the adrenaline rush from meeting so many new people from around the world was keeping us standing. In one word, the feeling that collectively defines us right now is “optimism”. Students and trip leaders are feeling oriented and prepared to dive into the next step of this journey. 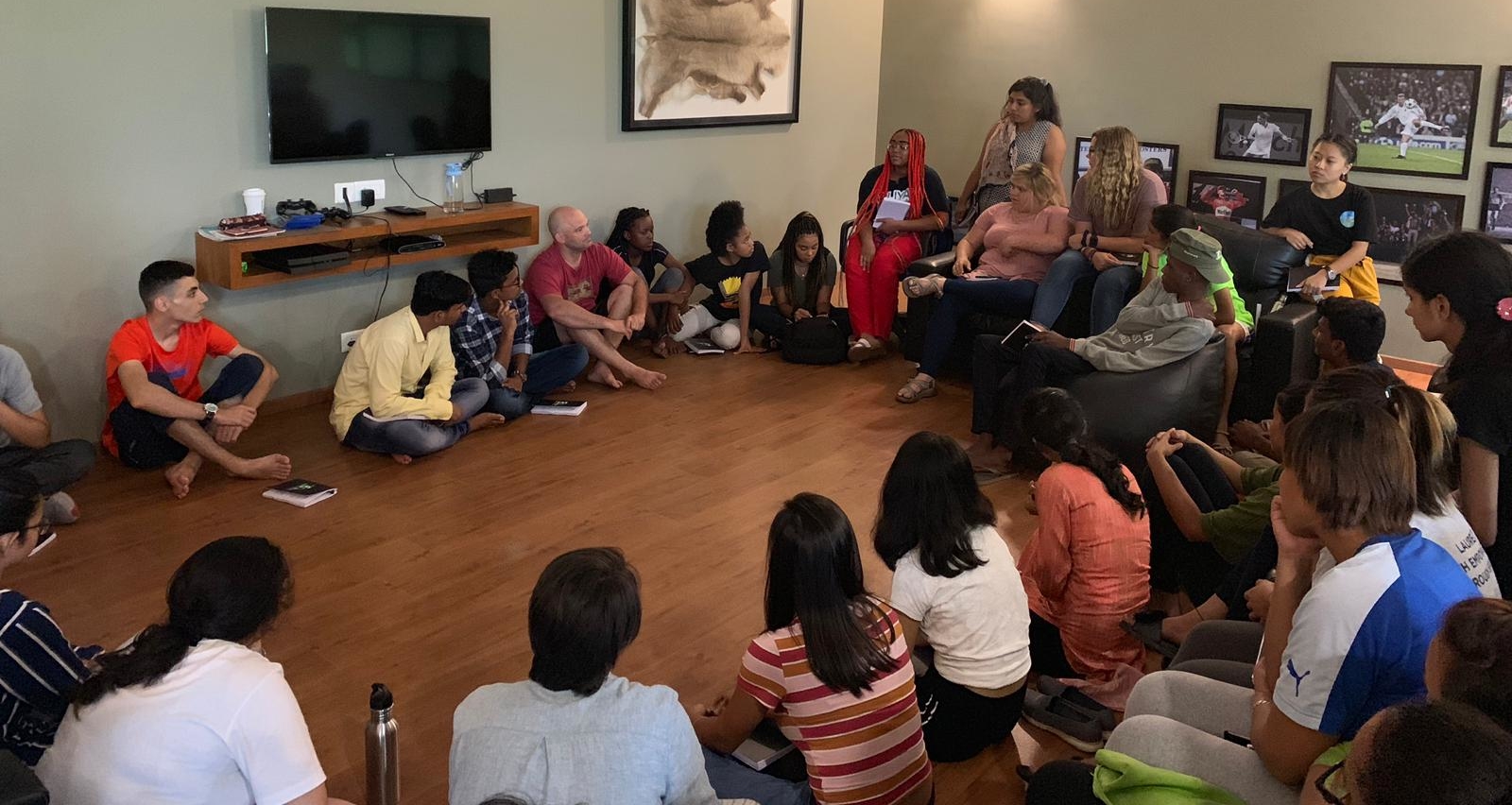