If I could describe today’s session with just one word it would be EMOTIONAL! But I have to reach a certain word count in order for this to be a proper blog so I suppose I should elaborate a little. Today’s session was about mental health and its first half was concentrating on how people in India perceive it. Turns out that there are a lot of myths about mental health and mental illnesses that Indian families actually believe in – for example, the most common and spread belief is that mental illnesses are not real at all – they are just an excuse for improper behaviour and laziness. It is also thought that mental illness is a sign for a character flaw and is viewed as a weakness rather as a condition that should be treated.

A major problem is that Indians do not think about their mental health as something that they should take care of – it is just a factor that is needed tp keep them at work and earning money, why should they spend those money on “useless sessions” in which you just talk about your day? Well, apparently those sessions are needed for almost every individual in India, because it is currently one of the countries with the greatest rate of depression. People have to change their mindset and realise the importance of maintaining their mental health – the problem is that first, there are very few universities in India that have psychology as a specialty, second, few universities lead to very few professionals in that field – about two psychologists per city with a population of millions, and third – not many people seek professional help for keeping their mental balance because they do not view mental illness as a problem that can be solved if they only ask for help.

A pretty upsetting situation, but Ms. Yesha – the wonderful woman who lead our session, said that she and other psychologists across India work together in order to raise awareness about mental health and its significance for society. They are not many, but they are determined and very good at what they do (I was convinced for that today) and I believe they have the power to bring hope for a happier India in the future!

After talking about the situation with mental health in India, it was time to talk about our own mental health. This part of the session I will not share with you guys in much detail since it was a very intimate experience and we promised each other to keep all what happened to ourselves. For a moment, we put down our masks and exposed our true vulnerable selves, sharing, hugging and at some point – crying. Whet we did was hard, but at the same time relieving and bonding – we did not leave this session the same… After we ran out of emotions and tears, we just lied down and did an awesome relaxing meditation for 20 minutes which had a miraculous effect on my entire body – we had to close our eyes and follow the commands of Yesha’s soothing voice which was telling us where to concentrate our energy – on different parts of our surroundings such as sounds and airflow, or our body (we had to tighten and then relax the muscles of each sector of our body). That was a very effective and calming exercise that clears your mind and strenghtens your senses.

At the end of the session, we did an activity that Yesha called “Active Kindness”. We were given pebbles which we had to decorate and write a positive message on – those pebbles we then put on different places outside, hoping that whoever finds a pebble and reads it gets the motivation they need to continue fighting for their dreams.

I will conclude this blog by saying that today’s session was not only informative, but very much needed by all of us to release our bottled up emotions and be reminded how important it is to take care of our mental health for being productive individuals as well as citizens in our communities. I would also like to tell you what I wrote on my pebble – however complicated and hard things may seem at the moment, always remember to reflect on the little things around you and “take some time to look at the colors” of life – spectacular and wonderful! 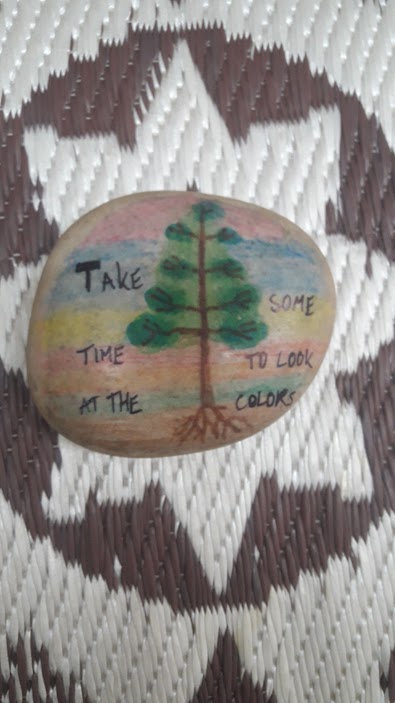